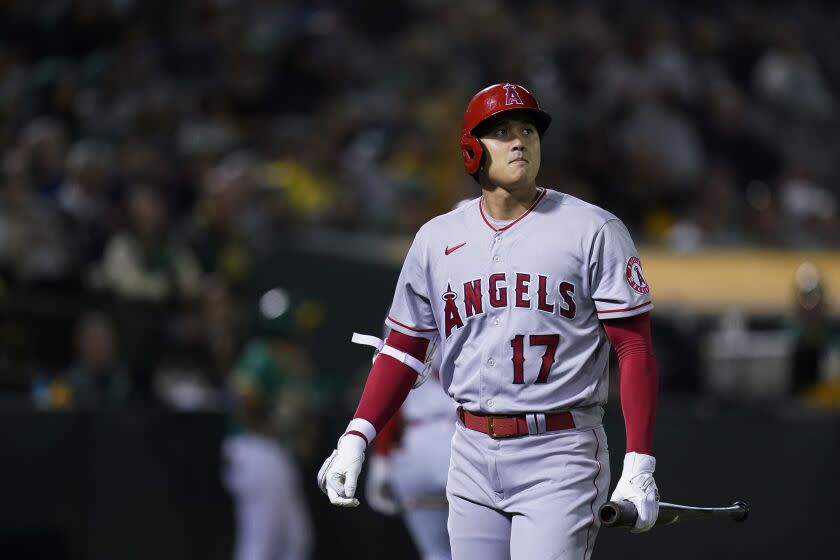 This should be a banner week for Shohei Ohtani, baseball’s truly global superstar.

This is the week the American League most valuable player and Cy Young awards are announced; Ohtani finished fourth in Cy Young voting and is a finalist for MVP. On Thursday, Ohtani declared that he would participate in the 2023 World Baseball Classic, joining Angels teammate Mike Trout as high-profile entrants in an event too many of baseball’s best players have skipped in previous years.

Alas, this also is the week Ohtani was named as a defendant, one of eight sports stars sued in a class-action lawsuit against FTX, the now-bankrupt cryptocurrency exchange.

Wednesday marked one year since the announcement that FTX had agreed to “a long-term partnership with global icon and history-making MLB Superstar Shohei Ohtani.”

In June of last year, five months before Ohtani signed with FTX, Major League Baseball did. In a five-year sponsorship deal, FTX was named the “Official Cryptocurrency Exchange brand of MLB,” and its patches were slapped onto the jerseys of umpires.

Imagine that: baseball’s arbiters of fairness and justice, brought to you by a company alleged to have run a Ponzi scheme.

Manfred declined to say how much money the league would lose, assuming the FTX sponsorship deal collapses, but he did call it “a meaningful deal for us.” Still, the reputation of perhaps baseball’s greatest player has been sullied by his participation in a venture for which the league itself had vouched.

In the news release unveiling the FTX sponsorship, MLB chief revenue officer Noah Garden was quoted thusly: “This is an incredibly exciting announcement for everyone in Major League Baseball as we partner with a global leader in the early stages of their unbelievable…