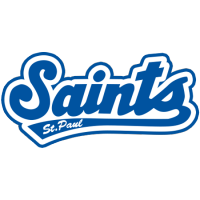 ST. PAUL, MN – Coming off a season in which the Saints held two separate Marvel’s Defenders of the Diamond’s Nights, the St. Paul Saints are diving headfirst into the Marvel Universe in 2023. In preparation for those promotional nights, which will be announced at a later date, the Saints unveiled their Marvel-inspired logo for the upcoming season.

It’s one of the most unique makeovers of the logo in franchise history. Since 1993, the Saints have been recognized for their fun-loving approach towards their fans and the game of baseball, while at the same time having a mischievous aura about them. These two distinct personalities are evident in the Saints Marvel-inspired logo design.

The Saints will utilize the logo on their uniforms and caps during all Marvel’s Defender of the Diamonds games in 2023. The cap will have a red background with the logo as previously described, while the brim of the cap is Saints navy.

Merchandise with the new Saints logo for Marvel’s Defender of the Diamonds series is available immediately via the Saints souvenir shop at the ballpark, open Monday-Friday 11:00 a.m.-1:00 p.m., calling 763-703-5219, or.