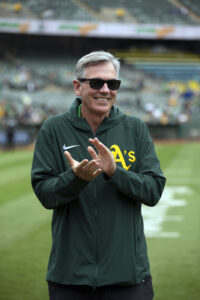 The A’s announced Friday that longtime executive vice president of baseball operations Billy Beane is transitioning into a new role — a senior advisor to managing partner John Fisher. He’ll “work closely with Fisher on strategic decisions,” per the press release, and will also “support the work of baseball operations now headed by general manager David Forst.”

“Billy is and will always be an Athletic,” Fisher said in a statement within today’s press release. “He is a trusted advisor to me and I look forward to continuing to work closely with him on strategic initiatives that impact our Club. This position at the ownership level allows Billy to pursue other non-baseball sporting interests while continuing to hold an important role with the A’s and me. I am also excited for David Forst to now serve as the head of baseball operations, while still continuing his long and successful partnership with Billy.”

Prior to this transition, Beane had been the longest-tenured baseball operations leader in the sport, having ascended to the post of general manager back in 1997. (That distinction now falls to Yankees GM Brian Cashman, who’s been running baseball ops in the Bronx since 1998.) Though Beane’s Athletics have never won a World Series, they’ve been a remarkably competitive club over the years in spite of working under some of the most stringent payroll restrictions in the game.

Despite rarely being able to keep his homegrown stars and what ostensibly appears to be an ownership-level aversion to extending pre-arbitration players on long-term contracts — the team’s most recent pre-arb extensions were Sean Doolittle in 2014 and Trevor Cahill in 2011 — Beane’s Athletics have reached the playoffs 11 times in a span of 25 years. Moreover, even amid the constant teardowns, rebuilds and transitional phases, the A’s never endured more than three consecutive losing seasons under Beane’s guidance.

“I’m incredibly proud of the 33 years I’ve spent here in Oakland, and I look forward to continuing with the A’s in this new role,” Beane said in his own statement. “I am…