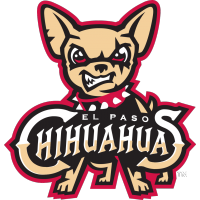 EL PASO, TEXAS – The El Paso Chihuahuas unveiled its 10th Year Celebration, presented by GECU, Friday along with a new set of jerseys ahead of the 2023 season.

The reveal included a 10th year logo, the 10th year jersey, and the new brown and yellow jerseys the team will wear to show their affiliation with the San Diego Padres.

“Since year one, GECU has been a Founding Corporate Partner,” said MountainStar Sports Group Senior Vice President and Chihuahuas General Manager Brad Taylor. “They have been an engaging, thoughtful and impactful partner and we absolutely love working with them and we are so pleased that they are the presenting partner of our 10th year.”

Crystal Long, GECU President and CEO stated, “GECU is proud to be the official credit union of the El Paso Chihuahuas. We’re passionate about supporting affordable and accessible fun for the whole family. It’s been a privilege to work together with El Paso Chihuahuas for the past decade to provide memorable experiences for all and cultivate team and community pride. We’re thrilled to continue and expand our collaboration as the presenting partner of the El Paso Chihuahuas 10-year Anniversary and Fireworks Spectacular sponsor!”

The 10th Year Celebration logo is in the shape of the state of Texas with the iconic mountain star in El Paso. The logo contains gradients of gold with the number 10 and the Chihuahuas Dog Head logo in the middle and the years 2014 and 2023 in a red banner to signify the 10 years since the Chihuahuas began. The logo also features “Presented by GECU” below the logo.

GECU and the Chihuahuas have had a close relationship since the 2014 inaugural season. GECU is a 10-year Founding Corporate Partner. The partnership includes the GECU Green Seats, the GECU Independence Day Celebration, and the GECU Debit Card, and now the 10th Year Celebration to name a few. The Chihuahuas have also been supporters of the GECU Foundation through its various initiatives.

To go along with the new logo, the Chihuahuas debuted a new jersey. The white button-down jersey features a gold “Chihuahuas” word mark across the chest, with gold and black piping, the 10th Year logo on the left sleeve and the United States flag on the right sleeve. The new on field cap, from New Era, is black with the raised Chihuahuas Dog…