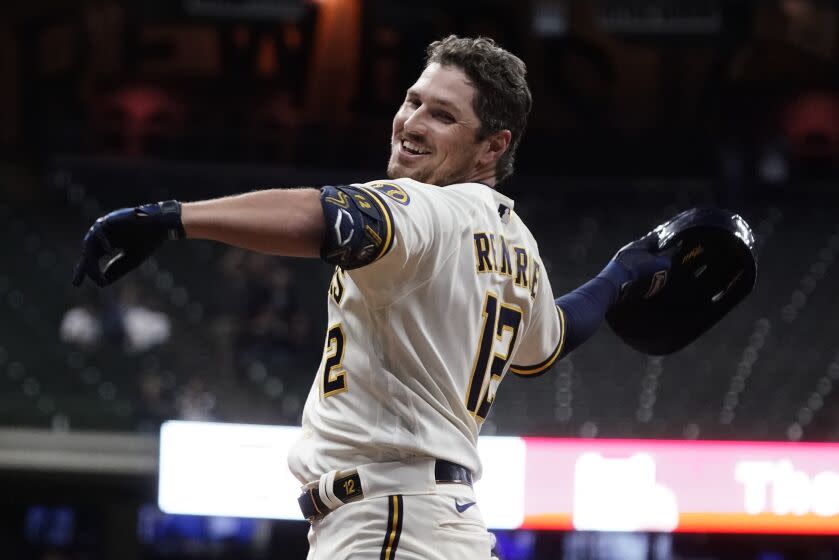 Perry Minasian has been making good on his promise to acquire proven major league talent to improve the Angels’ roster.

The move adds much-needed depth to an Angels outfield that includes Mike Trout, Taylor Ward, Jo Adell and Mickey Moniak. Trout is a mainstay as is Ward. And Renfroe, who has been a major leaguer since 2016, is no bench player, though he and Ward primarily played right field last season. Expect the decision on who starts in right and who starts in left to be made in spring training.

And it all raises the question: What does this mean for Adell, who was seen as part of the future of the Angels outfield?

“We need everybody,” Minasian said. “Our 40-man depth’s important; things happen over the course of a year.

“These guys, they’re not middle-tier players. We feel like they’re really good players. But we have some high-end guys and we’re trying to fill some of that middle part of our roster with quality, and we feel like we’ve done that.”

Renfroe, who led all right fielders with 11 assists this year, carries more than outfield experience. He hit .255 with an .807 on-base-plus-slugging percentage. The Angels had a .687 OPS, tied for 22nd in the majors.

Over 125 games, Renfroe contributed 72 RBIs and 29 home runs in Milwaukee’s second-place finish in the National League Central. He’s also one of seven players to hit 25 or more home runs in each of the last five full seasons. The others are Nolan Arenado, Paul Goldschmidt, Aaron Judge, Manny Machado, Kyle Schwarber and Eugenio Suarez.

Renfroe, who turns 31 in January, is a career .240 hitter with a .790 OPS in seven seasons with San Diego, Tampa Bay, Boston and Milwaukee. He’s eligible for arbitration again and likely to get a raise after earning $7.65 million this year. He can become a free agent after next season.

“We have a lot of young players on the roster … that haven’t necessarily established themselves at the big league level,” Minasian added when asked if he’ll have a conversation with Adell about his role. “I think it’s one of those things…