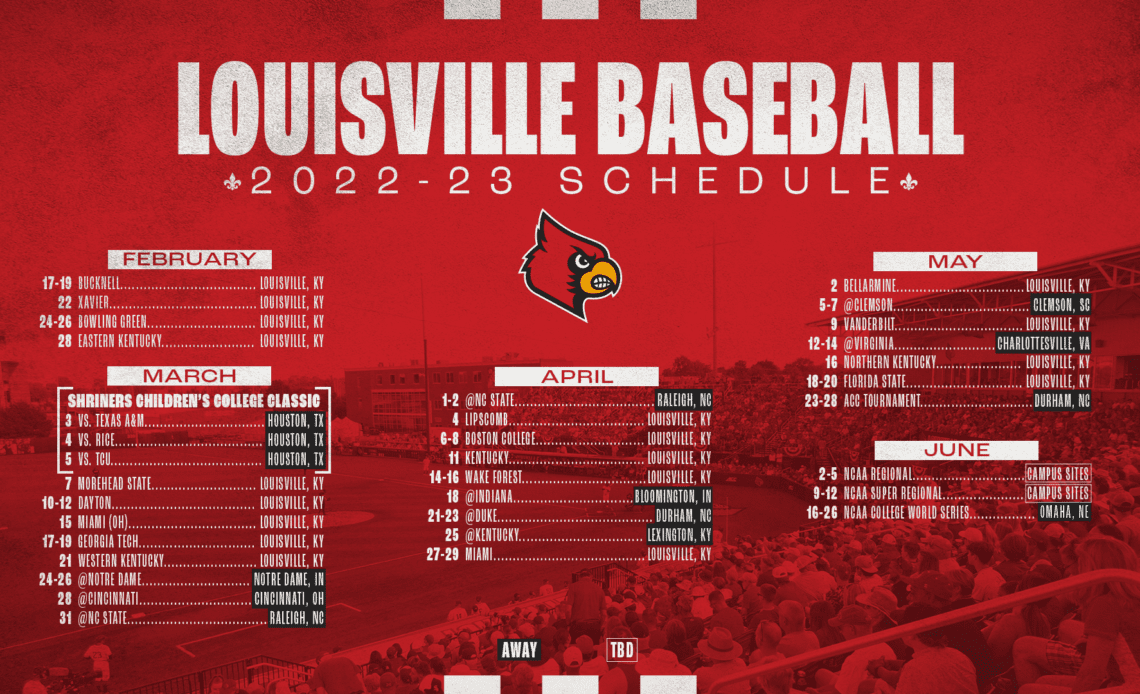 LOUISVILLE, Ky. – Head coach Dan McDonnell and the University of Louisville baseball program have released their schedule for the upcoming 2023 season.

Louisville’s 2023 slate gets underway on Feb. 17 with a three-game series against Bucknell at Jim Patterson Stadium, the first of 34 scheduled home games for the Cardinals this spring. Louisville will open the 2023 season at home for just the fifth time in Dan McDonnell‘s 17 seasons at the helm of the program.


The Cards are scheduled to play 21 games against teams that reached the 2022 NCAA Tournament, including a super regional rematch against Texas A&M in March.

Louisville’s home schedule includes weekend ACC series against Georgia Tech (March 17-19), Boston College (April 6-8), Wake Forest (April 14-16), Miami (April 27-29) and Florida State (May 18-20), in addition to the Battle of the Bluegrass against Kentucky (April 11) and Battle of the Barrel versus Vanderbilt (May 9).

The 2023 ACC Baseball Championship is set to be played at Durham Bulls Athletic Park in Durham, N.C., home of the Triple-A Durham Bulls, May 23-28. The 2023 NCAA Championship begins with regional play on June 2. The College World Series is slated for June 16-25/26 at Charles Schwab Field Omaha.

LOUISVILLE BASEBALL SEASON TICKETS ON SALE NOW
Season tickets for the 2023 Louisville baseball campaign are on sale now. Louisville’s 15 ACC games as well as non-conference games against Kentucky and Vanderbilt will be ticketed events at Jim Patterson Stadium. All other non-conference matchups will have free admission. Information about purchasing Louisville Baseball season tickets is available at GoCards.com/BSBTickets.