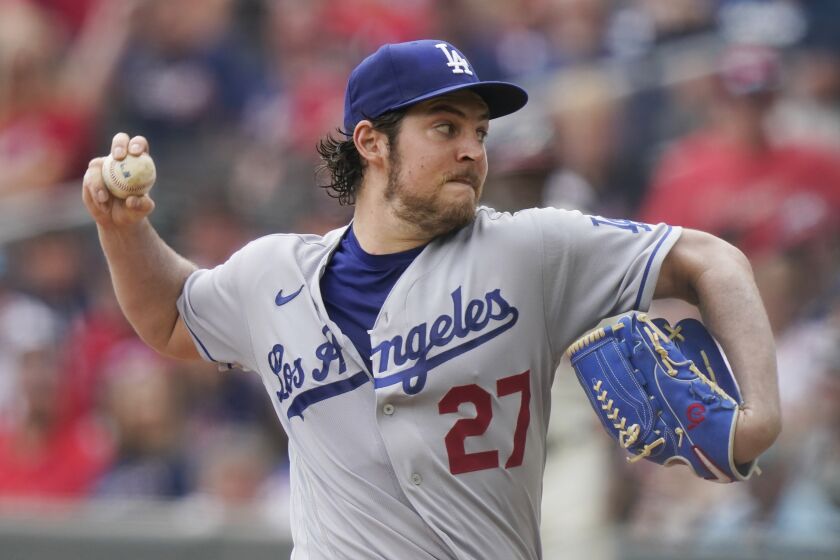 In a winter during which they have been roundly criticized for not spending money, the Dodgers just made the most important investment of many seasons.

They spent $22.5 million to reaffirm their place as a leader in this community.

They spent $22.5 million to reset the personal conduct standard for their employees.

They spent $22.5 million on Los Angeles.

In an obvious yet no less important decision announced Friday, the Dodgers chose to cut loose embattled pitcher Trevor Bauer amid the completion of his Major League Baseball-record 194-game suspension for violating baseball’s policy on domestic violence and sexual assault.

They officially designated him for assignment, meaning they have seven days to trade or release him. In either case, they will be responsible for most if not all the $22.5 million left on his contract.

Make no mistake, this move carries a trio of huge risks — in the stands, in the clubhouse and on the field.

In one stunning development, a Los Angeles Times poll revealed that the majority of fans wanted Bauer to return to the team.

Not quite as surprising were the reports that some current players contacted by the Dodgers were also in favor of his return.

Then there’s the matter of the Dodgers’ paper-thin starting pitching rotation, into which the former Cy Young Award winner would have fit as one of its most important pieces.

If Bauer wasn’t going to be the actual ace, he’d be a close second. If he ends up pitching for one of the Dodgers’ rivals while they continue to pay his salary, management will be criticized all summer. Seriously, can you imagine him as a San Diego Padre?

Fine, imagine away, it doesn’t matter where he plays or how he pitches, the important thing here is that he is no longer a Dodger.

If they kept Bauer, the message the team would have sent is one of tolerating violence against women, a philosophy that would have compromised safety in their Dodger Stadium stands and create a win-at-any-cost mandate on the field.

No, he was never charged with a crime, but he just served the longest suspension in the seven-year history of MLB’s policy on domestic violence and sexual assault.

His alleged sexual assault of three women was upheld by an arbitrator. According to the Wall Street Journal, the league’s notice of discipline sent to Bauer detailed “violent and nonconsensual acts during sex” with two of the women and choking to the point of unconsciousness with the third.

Bauer has denied wrongdoing in…