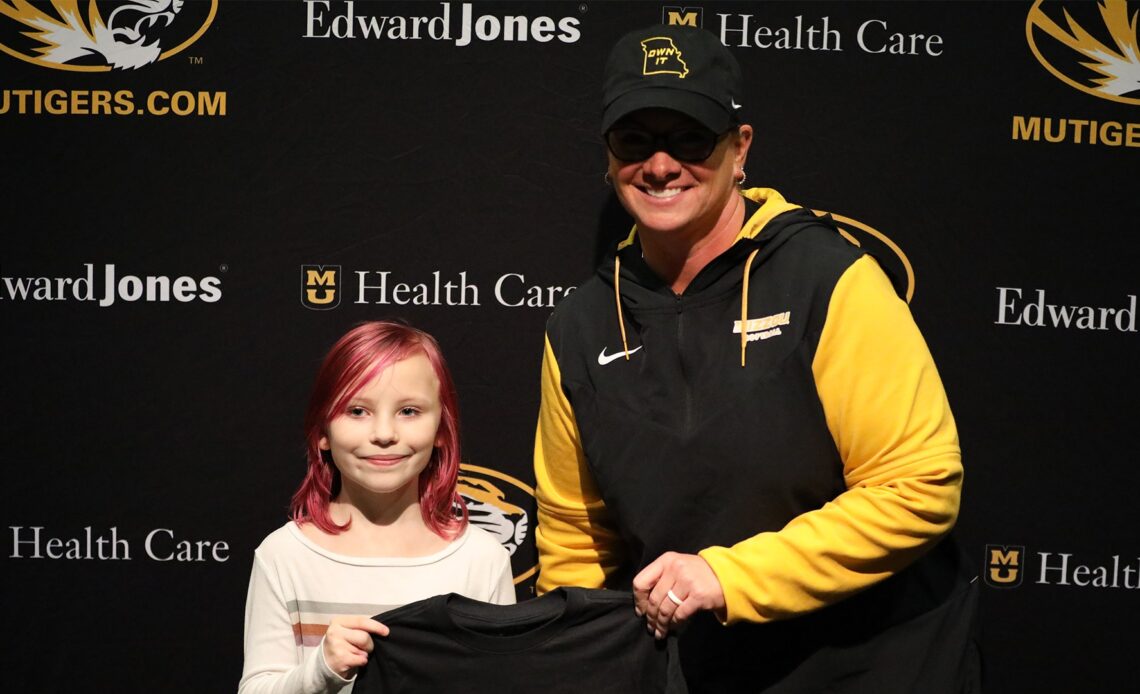 
COLUMBIA, Mo. – The University of Missouri Softball program officially signed nine-year-old Aubrey Warden to a contract for the 2023 season. Warden signed her contract Sunday afternoon in front of Tiger players and coaches along with her family at the Mizzou Athletics Training Complex.

Warden loves softball, basketball, and science and is a huge Mizzou Tigers fanatic, so Sunday was a dream come true for her.

She was born on October 7, 2013, two minutes before her twin brother, Abel, with Amniotic Band Syndrome.

Affectionately known as AJ or little Nemo, Aubrey Jean Warden, was born with a lucky paw (foot) and a lucky fin (hand) due to Amniotic Band Syndrome, also known as constriction ring syndrome. She was born at 34 weeks with all five fingers on her right hand, but the two banded together were shorter than the others and webbed together. She has had two surgeries on her right hand since birth.

The toes on Aubrey’s left foot were also banded together. She has four toes on her left foot and has had four corrective surgeries on her foot since birth.

ABS occurs when fibrous bands of the lining inside the uterus get tangled around a developing baby. Not knowing how to untangle, babies pull and can lose a limb, stunt the growth of a limb and in rare cases, the bands can wrap around the baby’s head or umbilical cord.

ABS can occur when the inner layer of the placenta, called amnion, is damaged during pregnancy. If this happens, thin strands of tissue (amniotic bands) form inside amnion. ABS is a rare birth defect in which bands of tissue inside the sac of fluid that surrounds a baby in the womb tangle around the baby’s body causing injury. This happens when there is a rupture in the inside sac.

ABS is not genetic or hereditary and can be detected between six and 18 weeks. Doctors discovered Aubrey’s ABS at 14 weeks and began closely monitoring her mother, Stephanie Warden, weekly. The doctors discovered the bands around Aubrey’s right hand but due to Aubrey being a twin, the risk of surgery was too high and was not chosen because of the high level for pre-mature labor.

As Aubrey grows older, she will need more surgeries, but she is not letting ABS slow her down. She loves being outdoors, blaring music poolside, playing softball, and watching the Mizzou Tigers softball team.

Mizzou is excited to…