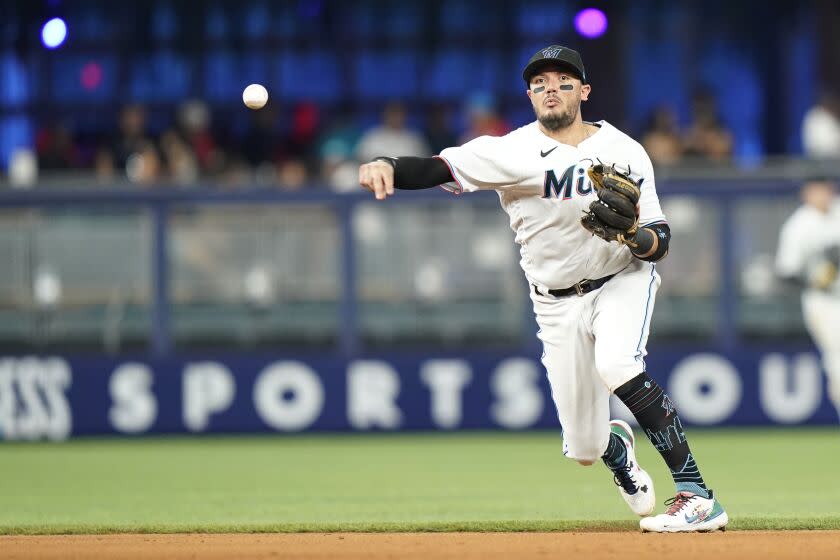 The Dodgers fortified their infield defense by acquiring veteran shortstop Miguel Rojas from the Miami Marlins for infield prospect Jacob Amaya on Wednesday, a move that could push Gavin Lux to more of a second-base role and utility man Chris Taylor to more of an outfield role.

Rojas, who turns 34 in February, is an elite defender whose offensive production dipped last season, when he hit .236 with a .605 on-base-plus-slugging percentage, six homers, 19 doubles and 36 RBIs in 140 games.

A right hand injury may have contributed to his offensive struggles in 2022 — Rojas caught his hand on a slide into third base in the first game after the All-Star break and hit .230 with a .557 OPS and no homers in his final 58 games. He underwent surgery to remove cartilage from the wrist in October.

The 6-foot, 188-pound Rojas, who made his big league debut with the Dodgers in 2014, was acquired more for his glove and strong and accurate throwing arm than his bat.

Rojas was a Gold Glove finalist in 2022, and he ranked second behind Dansby Swanson with 15 defensive runs saved and tied for fifth among big league shortstops with 10 outs above average, according to Fangraphs.

Rojas has made the majority of his big league starts (640) at shortstop, but he has also made 109 starts at first base, 99 at third base and 73 at second base. He is expected to play third base, shortstop and second base with the Dodgers and compete with Lux for the starting shortstop job.

The plan entering this winter was to move Lux to shortstop to replace Trea Turner, who signed an 11-year, $300-million deal with the Philadelphia Phillies, but some scouts question whether Lux has the arm strength and accuracy to play the position on an everyday basis.

The acquisition of Rojas could allow Lux to play more second base, a position he seems more suited for and that will be more physically demanding — requiring more range and quickness — with baseball banning infield shifts in 2023.