MLB Clubs Have Already Spent Record $3.36B on Free Agents 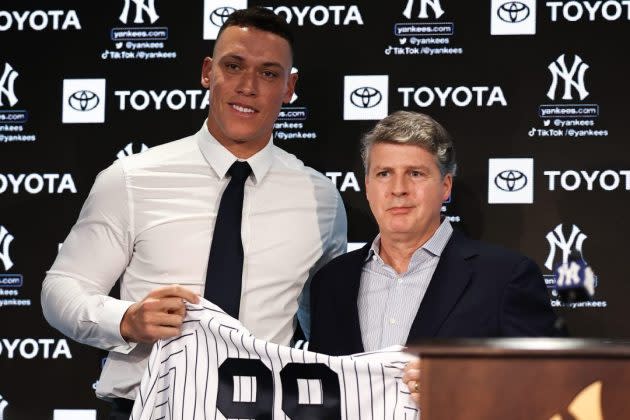 Major League Baseball teams have spent a record $3.36 billion on 99 free agents alone this offseason, according to figures amassed by Spotrac.

And the Yankees and Mets top the list of spenders; the two New York clubs have combined to spend just about $1 billion—the Yanks at $573.5 million and the Mets at $402.2 million after an anticipated 12-year, $315 million deal for shortstop Carlos Correa failed to materialize.

As of this writing, Correa had agreed to return to the Minnesota Twins on a six-year, $200 million deal, but that pact was also pending a physical, and Correa has failed two of those this offseason, with the Mets and San Francisco Giants, because of an ankle injury he suffered as a 19-year-old.

If the Twins deal happens, their free agent expenditures will jump to $241 million with MLB’s overall figure at $3.56 billion.

Under hedge fund manager Steve Cohen, the Mets are sitting at an MLB-high payroll of $298 million, well above the initial luxury tax threshold of $233 million for 2023.

They signed free agent starter Justin Verlander to a two-year, $86.66 million contract and are now paying him and incumbent Max Scherzer $43.33 million a year each.

The Yankees spent much of their money on re-signing AL home run record-holder Aaron Judge to a nine-year deal worth $40 million a season—the largest free agent deal in MLB history. The negotiation process took several months as the San Francisco Giants and—in the end—the San Diego Padres were in hot pursuit of the right-handed slugging outfielder.

“The last month, it was difficult to imagine the New York Yankees without Aaron,” Yanks principal owner Hal Steinbrenner said on the day just before Christmas, when he named Judge the team captain. “One of the conversations we had two weeks ago, I actually said to him, ‘As far as I’m concerned, you are not a free agent. As far as I’m concerned, you are a Yankee, and we need to do everything we can to make sure that remains the same.’”

Along with re-signing Judge, the Yankees solidified their starting rotation by adding left-hander Carlos Rodon on a six-year, $162 million deal. The team also re-signed free agent first baseman Anthony Rizzo to a two-year deal worth $40 million that includes a club option for a third year with a $6 million buyout. He’ll earn $17 million this season.