Will Trevor Bauer play Major League Baseball again? What executives around the league are saying 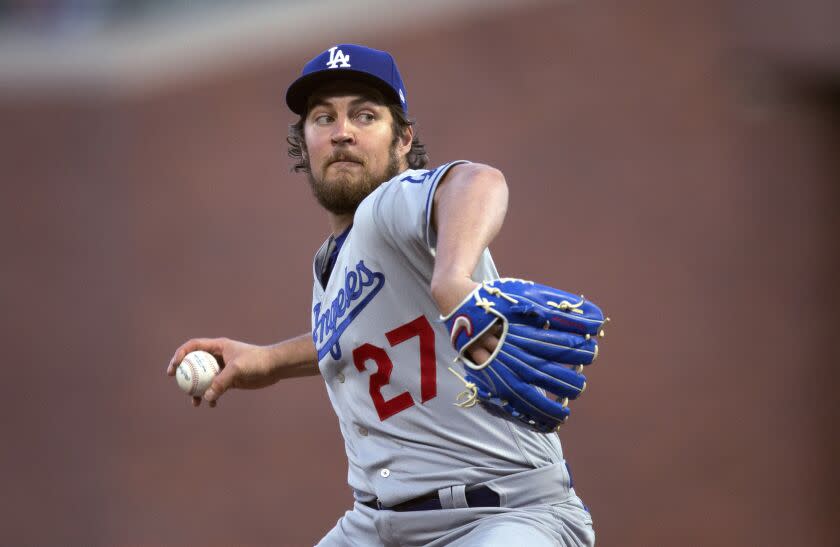 Trevor Bauer became a free agent on Thursday, but the market will be a lot more hostile toward the 2020 National League Cy Young Award winner than it was two winters ago, when Bauer signed a three-year, $102-million deal with the Dodgers after turning down a lucrative offer from the New York Mets.

“The only guy who I know for sure would sign him is Al Davis,” one high-ranking major league executive said, referring to the renegade Oakland Raiders owner who relished his organization’s bad-boy image right up until his death in 2011.

Bauer was designated for assignment last Friday, the Dodgers choosing to sever ties with the right-hander — and swallow the remaining $22.5 million on his contract — rather than face the potential public backlash of retaining him.

The Dodgers were unable to trade Bauer by Thursday, the end of a seven-day window in which they had to deal him, and the embattled pitcher was given his unconditional release.

Bauer, 32, is eligible to return this season after his 324-game suspension for a violation of Major League Baseball’s sexual assault and domestic violence policy was reduced by an arbitrator to 194 games on Dec. 22, a decision the MLB said it “will abide by” despite its belief that “a longer suspension was warranted.”

The Dodgers had 14 days from that point to reinstate or release Bauer, and they went all the way up to last Friday’s end-of-business-day deadline, even meeting with Bauer in Arizona the day before, to announce in a one-paragraph press release that Bauer “will no longer be part of our organization.”

The odds of a deal in the week the Dodgers had to trade him were remote considering any team interested in Bauer could sign him for the major league minimum salary of $720,000 and not give up any prospects.

Bauer is now free to pursue a job with any team, but is there a team willing to employ him?

The Times reached out to 16 front-office executives, most of them team presidents and general managers, to see whether they had any interest in signing Bauer, who went 8-5 with a 2.59 ERA in 17 starts with the Dodgers in 2021 but hasn’t pitched in a professional game in 19 months.