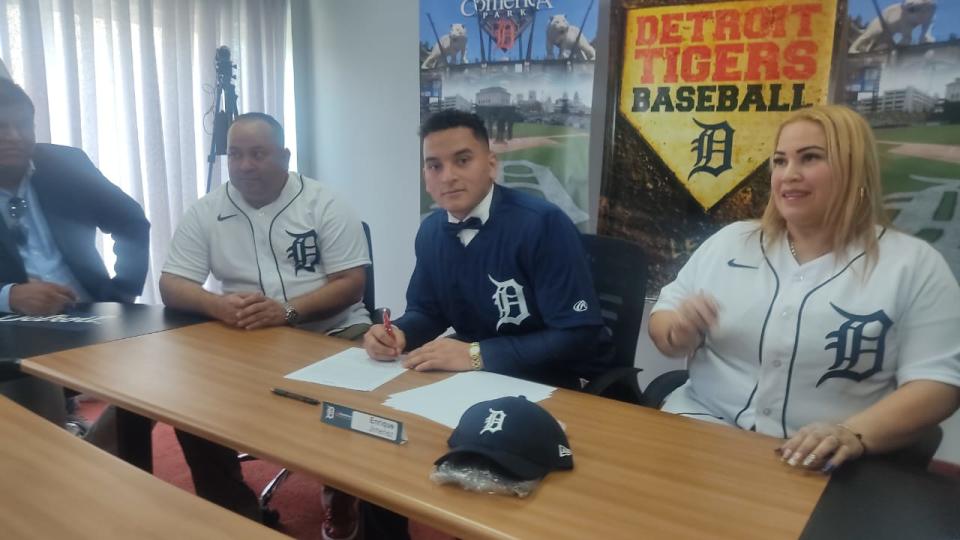 The highest-ranked prospect of the quartet is Jimenez. The 17-year-old switch-hitter finished at No. 32 on MLB Pipeline’s top-50 list and No. 32 on Baseball America’s top-50 list.

He received a $1.25 million signing bonus for his professional contract, according to sources. The Tigers entered the international signing period, which ends Dec. 15, with a bonus pool of $6,366,990.

They’re one of eight teams with the maximum bonus pool.

From an all-around standpoint, Jimenez is known for his athleticism, sharp makeup and baseball instincts. He is considered an excellent game caller, even as a teenager, while his blocking, framing, receiving and footwork skills develop. Simply put, he takes advantage of the sometimes overlooked details to help his team win.

On offense, he knows how to put the ball in play and hits the ball hard. His power typically comes from the right side of the plate.

Jimenez is the fifth-best catcher in the 2023 international class, according to MLB Pipeline, behind Ethan Salas (No. 1 overall, San Diego Padres), Alfredo Duno (No. 4 overall, Cincinnati Reds), Daiverson Gutierrez (No. 27, New York Mets) and Carlos Silva (No. 31, Minnesota Twins).

A YEAR IN REVIEW: What to remember about Tigers in 2022, from on-field disappointments to organizational restructuring

The Tigers signed Perez, who turns 17 in mid-August, for a $1.1 million signing bonus. He is ranked No. 48 by MLB Pipeline (No. 38 by Baseball America). The right-handed hitting outfielder has trained under Cristian “Niche” Batista in the Dominican Republic.