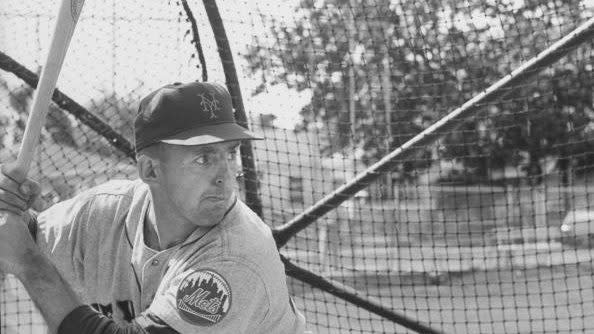 NEW YORK – Frank Thomas, a three-time All-Star with his hometown Pittsburgh Pirates who later became the top hitter on the expansion New York Mets, died Monday. He was 93.

Both teams announced Thomas’ death. The Mets said he died Monday morning in Pittsburgh. No cause was given.

Nicknamed “The Original,” Thomas made it to Citi Field in late August when the Mets held their first Old-Timers’ Day in 28 years.

“This is my last fling for baseball,” he said that day.

Primarily an outfielder and third baseman, Thomas was selected to National League All-Star teams in 1954, `55 and ’58, when he set career bests with 35 homers, 109 RBIs and an .863 OPS. He finished fourth in the NL MVP race that year behind Hall of Fame sluggers Ernie Banks, Willie Mays and Hank Aaron, and just ahead of another player enshrined in Cooperstown: pitcher Warren Spahn.

Thomas was traded by the Pirates to Cincinnati in January 1959, and then to the Chicago Cubs and Milwaukee Braves. They sent him to the fledgling Mets in November 1961, and Thomas batted cleanup for New York in the franchise’s first game on April 11, 1962, at St. Louis.

He finished that season with 34 homers and 94 RBIs, most in both categories by far for a lovable laughingstock team that lost a big league-record 120 games under Hall of Fame manager Casey Stengel.

Those numbers stood as the club record for home runs until 1975 and RBIs until 1970.

New York traded Thomas to the Philadelphia Phillies in August 1964, and he also played for the Houston Astros before finishing his career in 1966 with the Cubs.

At age 93, he was a big hit on Old-Timers’ Day at Citi Field last summer.

“I’m so thankful that my dad was able to go,” Thomas’ daughter, Maryanne Pacconi, said in a Mets statement. “It meant the world to him to see his old teammates. I was thrilled with how the fans greeted him. I was so happy to see him in uniform again. We will treasure those memories forever.”

Thomas led the Pirates in home runs five times and RBIs four times, including his first year as a regular starter in 1953.

The team said he was a “proud family man and a man of great faith” who was “a valued member of the Pirates Alumni Association for over 30 years. He was most passionate about his charitable work with Camp Happy Days-Kids…