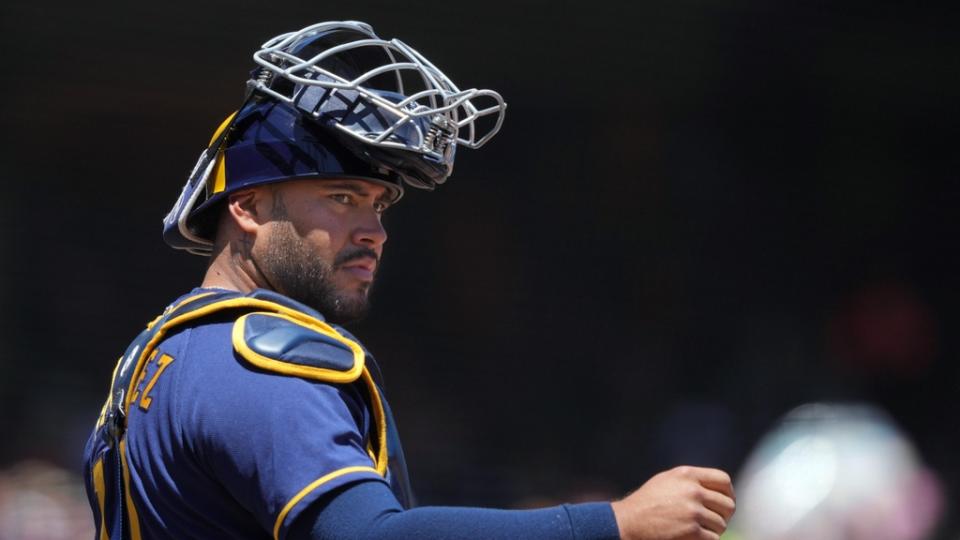 The Mets have Francisco Alvarez, the top prospect in all of baseball, waiting in the wings when it comes to their future at catcher.

And while Alvarez got a small taste of the majors last season and will theoretically have a chance to make the Opening Day roster in 2023, it’s unclear exactly when he will ascend to the role of starting catcher in the big leagues.

In the meantime, the Mets went out and signed veteran catcher Omar Narvaez to a two-year deal this offseason, and the 30-year-old said on Tuesday during his introductory news conference that he’s looking forward to contributing both on the field and as a mentor for his fellow Venezuela native.

“I think my experience, I’ve been able to have a good a good relationship with pitching staffs and learning from each other,” Narvaez said during the video call. “And if I can go and help Alvarez be a part of this team also, I’m gonna do it.”

Narvaez hasn’t gotten to know the 21-year-old just yet, but he’s sure that he’ll have plenty to teach him once he does.

“I know he’s down in Venezuela right now, so I’m just looking forward to meeting him and share a little information and kind of give him everything that I [have] from experience,” he said.

Over his seven big league seasons, Narvaez has put up solid numbers, slashing .258/.343/.386 with 51 homers and 191 RBI during his time with the Chicago White Sox, Seattle Mariners, and Milwaukee Brewers. He also earned an All-Star nod with the Brewers in 2021.

With all of that in mind, Mets GM Billy Eppler said Tuesday that the club is very excited to add Narvaez to the mix at catcher.

“Omar brings a skill set that we value on the offensive side. He displays a solid approach at the plate, contact ability, and provides a left-handed bat that will really deepen and blends well with our roster as it’s currently constructed. Throughout his career he’s shown impressive defensive skills, and we believe that he’ll work extremely well with our pitching staff.

Considering Alvarez’s raw power and the Mets’ need for pop from the DH spot, it’s possible that the team could carry three catchers coming out of spring training – Narvaez, Alvarez, and Tomas Nido – which could give them three strong options behind the plate for any given night.