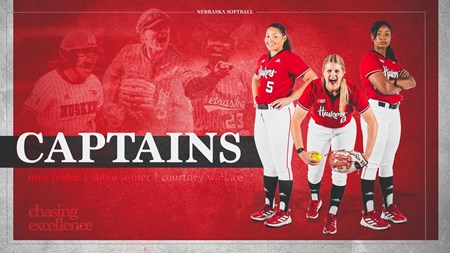 
The Nebraska softball team named its captains for the 2023 season, Head Coach Rhonda Revelle announced on Tuesday. Seniors Courtney Wallace and Mya Felder and junior Abbie Squier will all serve as captains for the upcoming season.

“We are proud to announce our captains for the 2023 season,” Revelle said. “Courtney, Mya and Abbie are ready, willing and able to be impactful leaders for the Nebraska Softball team. Each leads themselves extremely well in all aspects of their lives (we believe this is the first step in being a great leader), and we are confident that they will have the same focus as they lead the team.

“We know that they all take a lot of pride in the title while also embracing the responsibility associated with this prestigious honor. We look forward to working together and alongside them to help our team be the best we are capable of being.”

Wallace returns for her fifth year with the Huskers this spring. A returning captain, the right-hander ranked third in the Big Ten in saves last season and seventh in wins. Wallace was a NFCA Third-Team All-Midwest Region selection and earned the inaugural Rawlings/NFCA Gold Glove Award for the pitching position. The Omaha, Neb., native, was also named to the Big Ten All-Defensive and All-Tournament team in 2022. A two-time Academic All-Big Ten selection and six-time Nebraska Scholar-Athlete Honor Roll member, Wallace has made an impact in the classroom and the community as well. Wallace earned the Nebraska Silver Academic Medallion and the Sam Foltz 27 Hero Leadership Award. Wallace has also been named to the Tom Osborne Citizenship Team all four years of her career.

Felder enters her second season with Nebraska during the 2023 season. A NFCA First-Team All-Midwest Region selection, Felder led the team in batting average, hitting .373 on the season last year. The Fresno, Calif., native, started 50 games at first base, finishing with a .991 fielding percentage. Felder received Second-Team All-Big Ten and All-Defensive team honors as well as a spot on the Big Ten Tournament team. Felder is a two-time Nebraska Scholar-Athlete Honor Roll member and was named to the Tom Osborne Citizenship team for her contributions to the local community.