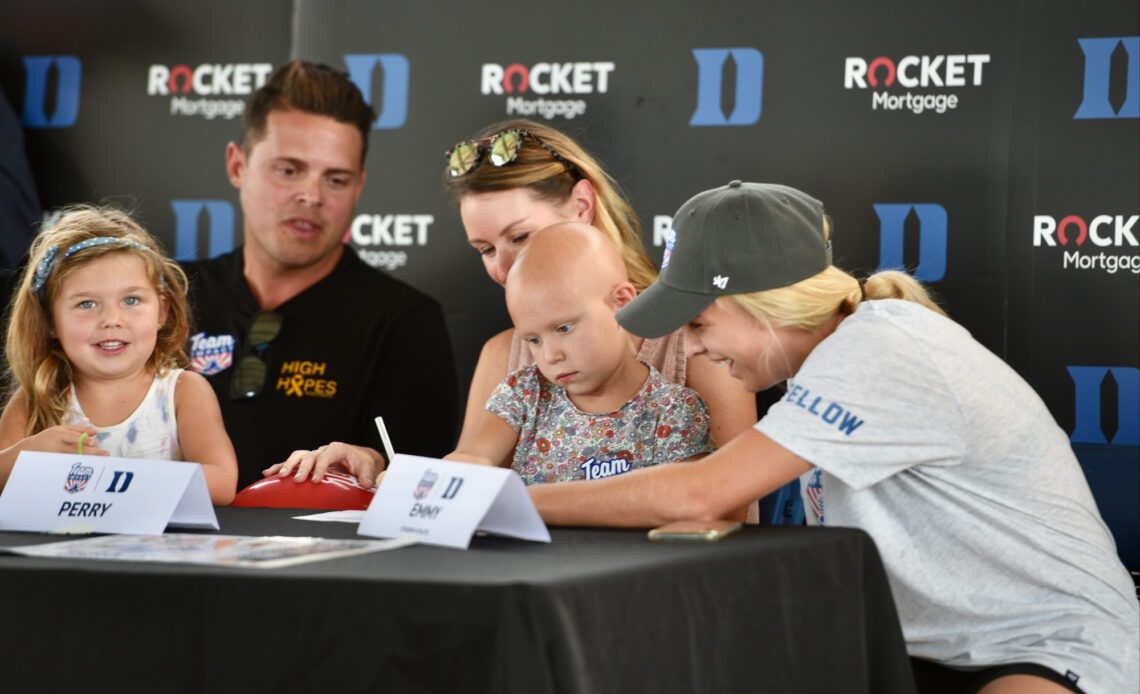 Team IMPACT is a non-profit organization that matches children diagnosed with serious chronic or terminal illnesses and disabilities with college varsity sports teams across the country. Since 2011, the organization has been implemented on 726 campuses and has matched 2,588 children with 64,700 student-athletes. Once the children are matched with a team, they remain in the program for two years. Team IMPACT serves as an opportunity for student-athletes to inspire growth and independence among the children facing serious illnesses. Simultaneously, the program instills a sense of purpose and self-awareness within student-athlete participants beyond their sport.


Three years ago, Duke student-athletes saw an opportunity to bring Team IMPACT to campus and, since then, have successfully matched children with seven varsity teams: football, women’s soccer, men’s soccer, softball, men’s tennis, men’s golf, and track & field/cross-country. The partnership has grown with the help of Duke women’s soccer captain, Emmy Duerr. Duerr is one of the four student-athlete Team IMPACT fellows alongside Lara Kohlenbach of track & field, Anthony Hinton of football, and Josie Varney of field hockey. The group of students work year-round with Team IMPACT to match kids to teams and spread awareness about the organization with the goal of having every team matched with a Team IMPACT kid. The Team IMPACT fellows, Varney, Duerr, and Hinton commented on the power of the organization to open their eyes to life beyond Duke and beyond their own.

“It’s incredible how resilient they are,” said Varney. “You can learn so much from them.”

Varney, along with the other fellows, have been helping out behind the scenes since the organization came to Duke’s campus. She helped lay the groundwork for the matching, meeting the children at the hospital and dropping off Duke sports gear at their houses. Currently, Duke field hockey doesn’t have a match, but are hoping to get matched in the near future and continue to support the other teams involved.

Last fall, the Duke women’s soccer team signed their first Team IMPACT child: Perry Coxe. To honor the newest addition to the Blue Devil family, the team put together a mock signing day for Perry. Duerr and her teammates hosted a ceremony…