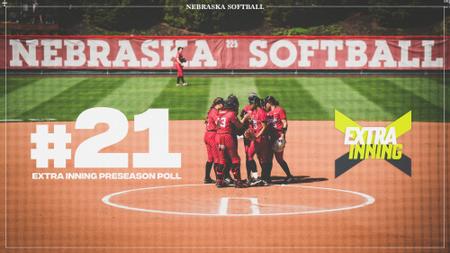 
The Nebraska softball team will begin the 2023 season at No. 21 in the Preseason Top 25 announced by Extra Inning Softball on Tuesday, Jan. 24.

The Huskers, who also are receiving votes in the ESPN.com/USA Softball Poll, are one of two Big Ten softball teams in the Extra Inning Softball Top 25, joining No. 6 Northwestern. Nebraska is also scheduled to have regular-season non-conference clashes with No. 2 UCLA, No. 3 Oklahoma State, No. 10 Virginia Tech, No. 12 Arkansas, and No. 24 Arizona, giving the Huskers eight regular-season games against preseason top-25 opponents.

Nebraska opens the 2023 season on Friday, Feb. 10 at the Houston Invitational. The Huskers will take on Lamar in game one starting at 10 a.m.