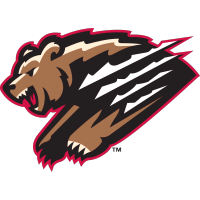 BOUNCE BACK GRIZZLIES: The Grizzlies are 3-0 in games this season after they lose by 9 or more runs. In those three wins, Fresno enjoyed an off day prior and would go on to outscore their opponents 37-15.

PLAYOFFS?! YOU’RE TALKING ABOUT PLAYOFFS: Earlier this month, Fresno Grizzlies playoff tickets went on sale for the team’s 2022 Postseason home games. The Grizzlies will host Games 2 and 3 (if necessary) of the best-of-3 championship series on September 20 and 21 at Chukchansi Park. The team will play against the Lake Elsinore Storm (South Division Champs). The playoff games at Chukchansi Park will include a variety of special promotions to celebrate the postseason. The first 1,000+ fans at each game will receive an exclusive 2022 Grizzlies Playoffs rally towel. All playoff games will feature a postgame fireworks show. All tickets for the two playoff games are available now at FresnoGrizzlies.com and cost only $10 (excluding Kodiak Club, Dugout Club, and Suites). Fans 17 years old and younger are eligible to receive free tickets to the playoff games, which can be claimed at the Chukchansi Park Ticket Office or by calling the team at 559-320-TIXS(8497). Fans who purchase tickets to games that do not end up getting played will have their purchase refunded.

GRIZZLIES VS. STORM: The Grizzlies face the Lake Elsinore Storm (Southern Division champs) in the 2022 best-of-three California League Championship Series. The squads meet for the second time in 2022 with Lake Elsinore taking five of six from Fresno at Chukchansi Park. Prior to Sunday, the last time the Grizzlies traveled to Lake Elsinore was in 2021, when they took four out of six from the Storm. Lake Elsinore joined the California League in 1994 and are one of four teams in the Southern Division. The Storm are affiliated with the San Diego Padres organization and have been since the start of the 2001 season. Prior to that, the team had ties with the California Angels from 1981-2000. Lake Elsinore has gone through a couple name and location changes in their club history. In 1979, they were known as the Santa Clara Padres. From 1980-85,…